Review by Daniella S.
It’s ridiculous to rate nature, so I’ll always give a 5 star no matter the circumstances for anything nature-made. I write just because we had such a…
Rating: 5

Review by Elizabeth L.
Beautiful park on the Carmel beachfront. Fun to watch the sea lions and crashing waves against the rocky waterfront. Scenic, relaxing trails through the…
Rating: 4 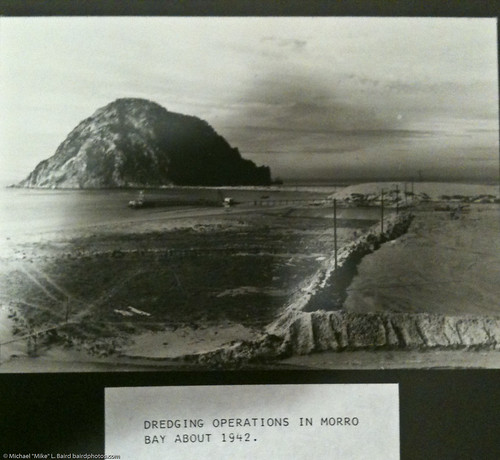 Image by mikebaird
1 of 3 1942 Dredging in Morro Bay CA. (circa 1942 photographer is unknown) Charlene Odekirk, Rosemary Olszewski asked me to take a photo of present-day 2009 Morro Bay dredging operations from the same perspective as the 1942 dredging photo she showed to me. It was suggested (by Rouvaishyana?) that the two images might be hung together in the Morro Bay Museum of Natural History for visitor interest. I have included a couple of candidate photos, as the current dredging setup barely shows in the image taken from the same point as the machinery is located further out at the Rock and is tiny in the image. I have posted the present-day image candidates at the set at www.flickr.com/photos/mikebaird/sets/72157622715084937/ (I have also included some iPhone shots of the 1942 image just for perspective – they are NOT of reproduction quality). You can download the full-resolution versions of the photos in this set (you may need to login, and select "all sizes") and print it, or click "order prints" and it can be fulfilled online. I turned my printer off over two year ago and now outsource all my limited printing needs to mpix.com or the like. I wanted to suggest that to really demonstrate the changes over time, that the new image(s) not be a print, but simply a photo, or better, a video, displayed in one of those inexpensive LCD digital picture frames that PJ used to promote my Click-Click product in 2008. Anyway, I can’t resist pushing people’s technical buttons. I have repeatedly suggested that museum displays that are visual only and not consist of palpable or 3-dimensional objects, be rendered via HD programmable LCD displays (a suggestion for the museum improvements committee?). Imagine, exhibits that never fade and can be incrementally improved at no cost! Best! Mike Baird Mike Baird mike [at} mikebaird d o t com flickr.bairdphotos.com

3/14/2012 Copied here are notes from a "Mindwalk" lecture sponsored by the Morro Bay Museum of Natural History, on Commercial Fisheries, that was held March 5, 2012. Thanks to Gwen Infante, Docent Administrative Assistant, for typing up these notes and making them available for everyone.
Morro Bay Commercial Fisheries – Past & Present
Mind Walk Lecture Series, Inn at Morro Bay
March 5, 2012

ECONOMICS OF FISHING – Henry Pontarelli, 3rd presenter
Billion US, 0 Million CA industry annually
1989-2008 US has become a net seafood importer.
Landings: ex-vessel value = EVV
1990 to present, 160-105 fishing boats working out of Morro Bay. This represents jobs for boat captains, deckhands, dock workers, fish processors, truck drivers, and more.
2003 – last large albacore landings in our area.
Crab – capricious fishery – no definition given but implies that it is unstable.
There is a pattern of limits to trawl & driftnet fisheries
1990 to present, price/lb. has doubled. Live-fish, hagfish, swordfish
CCSGA = Central Coast Sustainable Groundfish Assoc.
US, esp. CA fishery is among the most regulated & compliant fisheries in the world
Morro Bay Community Quota Fund. Strategic plan 2012-2015, foreign vessels must stay outside the 200 mile limit. State limit is 3 miles. There is less enforcement the father one ventures from shore. The goal of the Quota Fund is to set quotas that can be bought, sold, and traded for the Morro Bay/SLO coastal area so that fishery landings will be sustainable over the long-term.