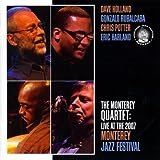 Album Description
“The Monterey Quartet” is a historic summit of four of today’s top Jazz Musicians together on one CD for the very first time!

Dave Holland: Today’s most accomplished pure-jazz composer among bassists; his sense of swing is unexcelled.
Gonzalo Rubalcaba: One of the most important figures to emerge from Afro- Cuban jazz; he’s an extraordinarily versatile pianist able to blend Cuban and American jazz traditions into a fresh, modern whole.

Live at the 2007 Monterey Jazz Festival

3 thoughts on “Live at the 2007 Monterey Jazz Festival”