Review by Warshok V.
I really like this place, and go there a few times a month. It’s a genuine neighborhood pub straight out of a small town in England–with everything that…
Rating: 5

Review by Erin C.
Great food, decent local beer. You can buy a stein there and they will write your name on it and hang it from the ceiling for you to use when you come in….
Rating: 4

Review by Richard G.
My wife and I were here a few years back and at that time not impressed, so I was not sure I was reading very accurate reviews when looking at Yelp for…
Rating: 5 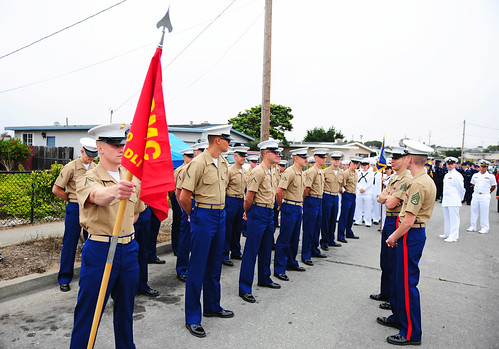 Image by Presidio of Monterey: DLIFLC & USAG
PRESIDIO OF MONTEREY, Calif. – The city of Marina hosted its traditional Labor Day Parade and Family Festival on Sept. 3, following a two-year hiatus. The Defense Language Institute Foreign Language Center’s Joint Service Color Guard, along with marching units from each military service branch, received standing applause from the enthusiastic crowds gathered along Reservation Road and Vista Del Camino Circle. The parade route spanned about four city blocks and had a strong military presence, including a mix of veterans and active duty military personnel, in celebration of the city’s historical ties with the former Fort Ord military base.