Review by Ethan Z.
It took two tries but we had a bucket-list experience with Chris’ Whale Watching. Their efforts to get us to see the whales enabled us to witness one in…
Rating: 5

Review by Kimberley H.
We were going to go on on a whale watching tour with Chris’ whale watching. To start our hotel recommended this company, and this was their first choice….
Rating: 1

Looking out at the water it looked calm. I should have known by the faces of the people on the…
Rating: 1

Monterey Cypress and the Marine Layer 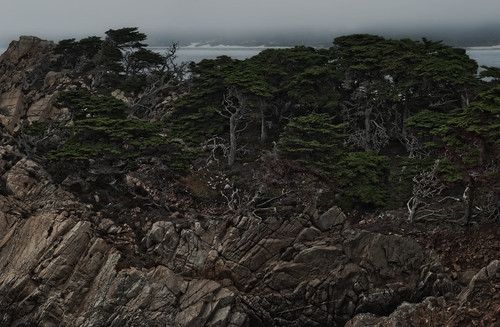 Punta de los Lobos Marinos
Famously dubbed "the greatest meeting of land and sea in the world," La Punta de los Lobos Marinos, more commonly known by its Anglicized name, Point Lobos, is a unique costal feature just south of Carmel-by-the-Sea. I popped down for a short hike with a new friend during a break from a conference in Monterey. The jagged, rugged and thoroughly rocky coast drops quickly to abysmal depths, producing a rich stage for the ballet of marine life. I hoped for otters. A docent said that a pod of Orcas had been around the area and the wise creatures had decided warmer, orca-less waters a bit north would make a better spot. Instead, we saw a few sea lions, harbor seals and thousands of cormorants painting the higher points with their guano. A few hours was far too short a visit to do more than grab a snapshot or two of the moody beauty which I think typifies the area.
A few of you have emailed me recently with links to your own photoblogs. When things have cooled down a little bit at work and I have a bit more time, I will put together a "friends" section on the sidebar that will feature links to other photoblogs. I know (because I often quickly visit and occasionally comment on these photoblogs) that you guys are all insanely talented and I would love to send some (read: what little I have) traffic your way. Please link your photoblog in the comments section and I’ll check it out and (likely) include it!
A splendid hike
The trails here are very well tended and (I think) very well trod. I had the luxury of being here on a weekday when there was no one else within sight for most of the trail. A few ups and downs carry the path from parking lot to seacliff along the coast, giving the day hiker stunning views of sea-battered rocks, kelp-forest and Monterey cypress. I always stay on the trails when I’m out someplace that I fear is overvisited and Point Lobos was no exception. Although I would have loved to scramble along the rocks and get somewhere particularly wild, I contented myself making a few images of these stalwart pines silhouetted against the fog and Monterey Bay from the trail.
No great skill or stamina as a hiker is needed to behold a series of coves, beaches and geologic features that cause the rest of Big Sur to pale in comparison. Earlier this summer I had decided I was to head down to Big Sur and collect some photographs, but I found the place totally overrun. I was glad to be here when things had quieted down, and I very much look forward to seeing the place in the wintertime.
The reserve closes 30 minutes after sundown, and having waited until nearly the last moment, we were the last two souls to leave the place. I eagerly await the arrival of winter and the cessation of these deep marine layers. A flush of color at sunset is only visible on the mountain tops along a few spots on Highway 1. While the summer persists, however, I have done my best to render the dramatic and melancholy coastal weather in bits and bytes.
The surf was remarkably smooth, generating little if any spray and only small swells. Occasionally, however, a larger wave would come through and create some noise and drama. I tried to capture a far-off collision of land and sea and found myself staring off into the distance, thinking of The Count of Monte Cristo. Here on Point Lobos, on the central California coast, is the the island Tiburón where Dumas’ Edmond Dantes arrives after a long swim following his daring escape form the Château d’If. Dantes dear friend the abbé Faria had passed away unexpectedly in his cell and Dantes decides to use this opportunity to make is way out of the prison. Faria is to be buried in the "graveyard" of the Château d’If. What Dantes doesn’t know as he wraps himself into Faria’s sackcloth coffin is that the graveyard is the briny deep of the Mediterranean. In the depths of night, Dantes is thrown from the cliff of the Château d’If with an iron shot tied to his legs. A long swim and he is nearly wrecked upon the rocks of the island Tiburón where his adventure begins.
On the southern end of the reserve is a more gently sloping and more easily tread outcropping. Here the harbor seals stretch out on the tidal islands and soak up what paltry rays pierce the mixing clouds. For nearly an hour I played around with my camera here amongst the rocks. Throughout my trip to Point Lobos I brought my brand new 10-stop (1000X) neutral density filter with me and captured a series of long exposures. I will post those on the next installment of La Punta de Los Lobos Marinos here on The Golden Sieve.